"Clamp" Immobilizer for truck wheels up to...

€12.39
The pocket-sized Pepper Spray approved for civilian use.

€12.39
The pocket-sized pink Pepper Spray approved for civilian use. TEMPORARILY SOLD OUT

€19.42
The perfect pepper defense spray for the Police, it shoots Ballistic Gel and is 100% Approved for Civilian Use.

€19.42
The perfect pepper spray for the police officer, shoots foam and is 100% approved for civlian use.

€11.57
RESTRICTED SALE. Although the system allows you to add and pay for this product in your shopping cart, and even confirm the order by sending an automatic email thanking you for the order, this product WILL NEVER BE...

€12.40
Personal Alarm with Key Ring, ideal to alert in situations of danger.

€20.67
Drastically reduces the effects of chemical agents in just a few seconds. Can prevent from hospitalizations, claims and compensation,...
Showing 1-21 of 21 item(s)

SABRE RED is the most effective self-defense spray brand made today, as it is 95% hotter than other brands. The US Firearms Association and thousands of Law Enforcement Agencies around the world vouch for it. The strict quality control and raw materials testing – OC, Oleoresin Capsicum – guarantee all Sabre Red defense sprays to be always as powerful as effective: basic premise to any spray thought to be used by the Police. .

SABRE defense sprays line offers 3 levels of potency and Sabre Red category imported to Spain, Andorra and Portugal is level III, which means it has the greatest degree of incapacitation and thus the longer time of decontamination.

There are plenty of defense sprays in the industry. Some of them, as Sabre Red, are made of pepper extract “OC”, others of chemical products like CS and CN tear gas, but none of them has the “stopping effect” Sabre has on an aggressive and/or intoxicated attacker.

Sabre Red sprays are orange-colored allowing you to have control over the direction and impact area and has another invisible component to mark the attacker during the 48 hours after spraying, which permits Police officers to identify them with UV light (ultraviolet). 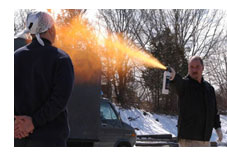 Sabre Red offers the greatest number of bursts per second performed in sprays of the same size, allowing to stop multiple attackers with only one unit. The stream spray fires up to 5 meters distance including small canisters.

Sprays contain nitrogen and water. It is 100% natural, nonflammable and no carcinogenic. They perform at -30 ºC and at 50 ºC in the same way. They are not aerosols, do not contaminate the area and naturally respect the environment. .

Depending on the kind of safety valve the spray has, it fires “gel”, a trickle of liquid that goes quickly to the attacker’s face, regardless of wind blowback. It does not contaminate bystanders, or it fires “foam”, that reduces even more, if possible, environmental and collateral contamination.

You can find spray patterns with different features:

• Gel: ideal for defending from an attacker several meters away without affecting bystanders.
• Foam: ideal for defending from close attackers. Its diameter of diffusion makes you to have to barely aim the attacker to affect him. The foam reduces collateral damages of contamination by splattering.
• Fog:ideal for having multitude under control. It makes a cloud that disperses into the environment affecting the whole area.

In Spain, the best selling sprays in the industry present certain characteristics in their formulas that make them harmful e.g. CS gas or propane used as propellant. SABRE sprays, on the contrary, include nitrogen and water that guarantee a higher safety to users, more effectiveness and respect the environment. 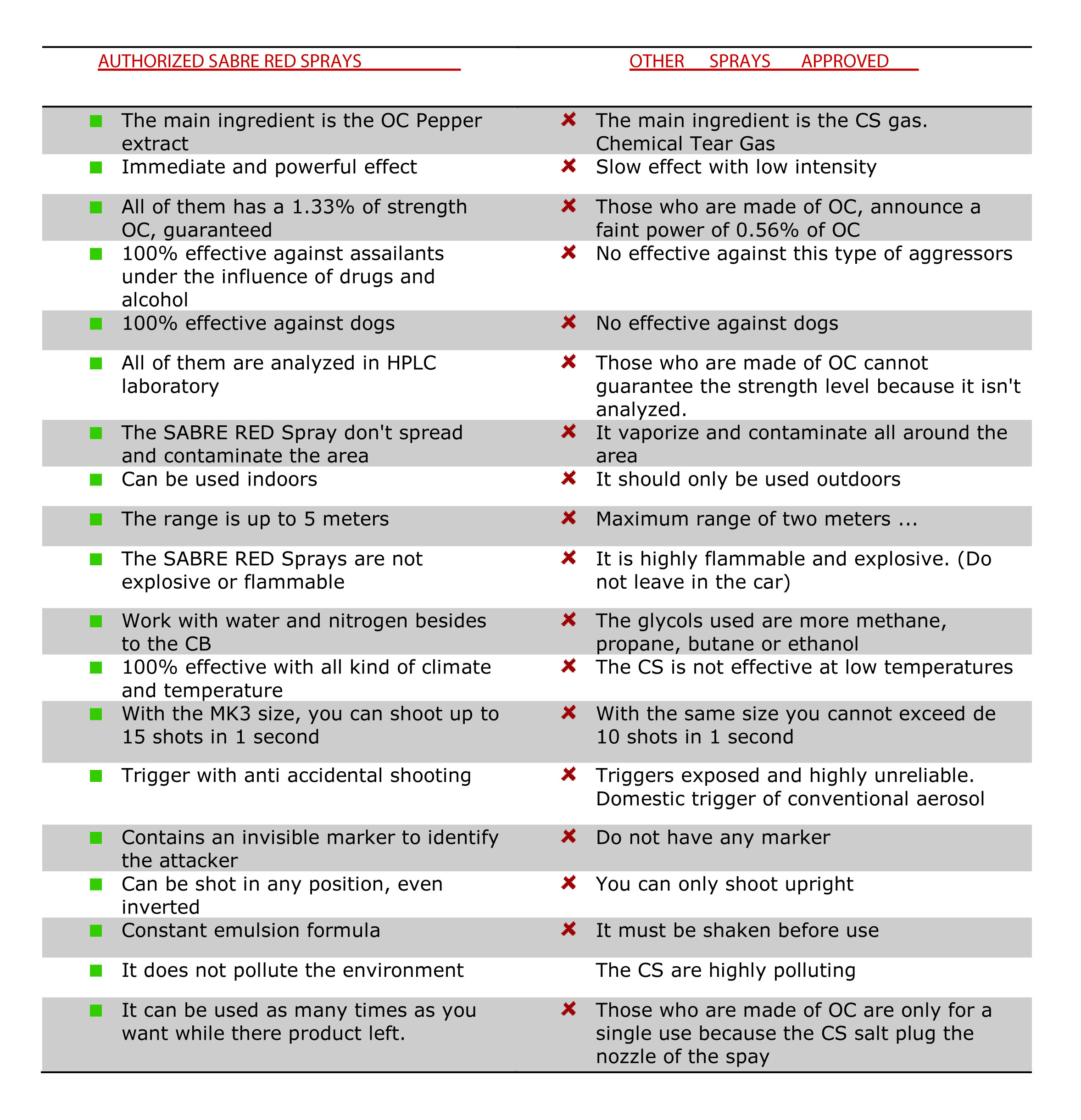 SMK30 and SMK40 Gel models have the revolutionary CROSSFIRE technology .
The main advantage is that deploys continuously from any position, including upside down, with many more bursts per second. 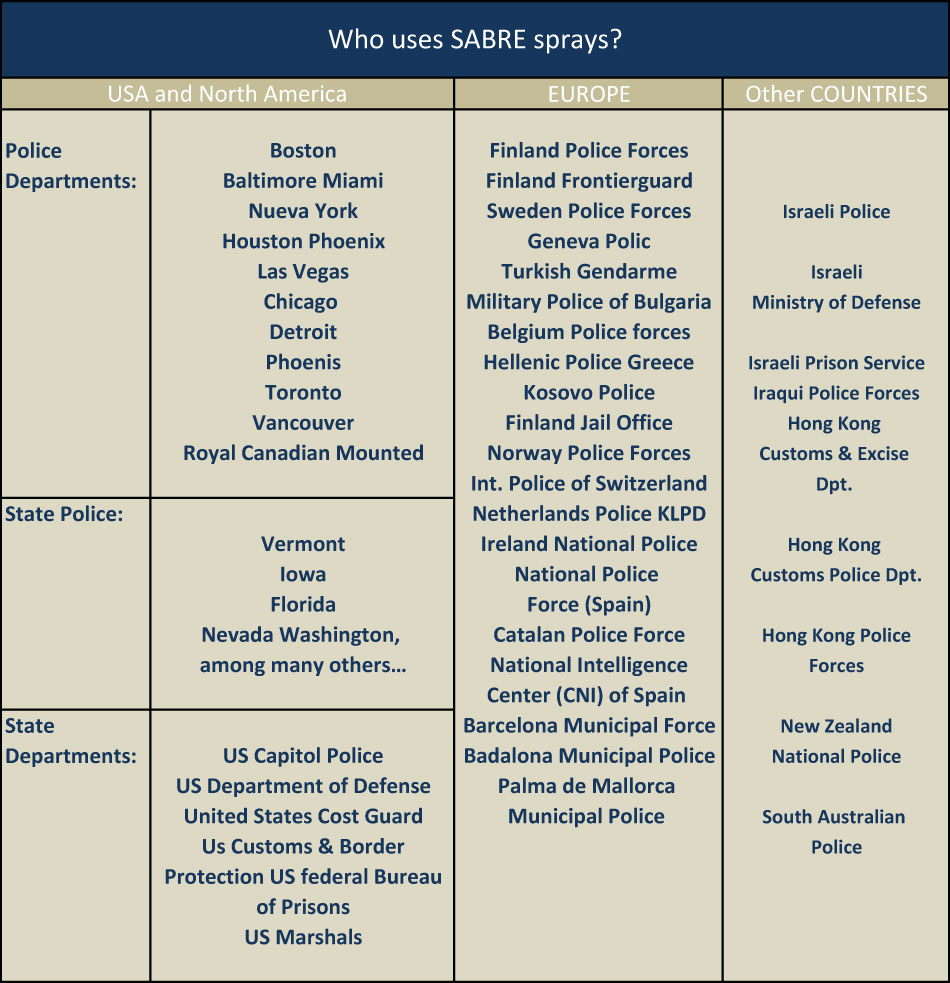 These are some of our most distinguished clients, among many others around the world, which have already officially provided their officers with SABRE RED sprays.

In order for you to make always a responsible use of the spray, we offer several courses on “certified Sabre Red end user” along the year. In this way, you will learn all characteristics Sabre Red defense spray has, when, where and how to use it, the current legislation, the symptoms produced by it, the correct procedures for deploying it and the decontamination process.

For those who are trainers, police or self-defense instructors, we have a Sabre Red training program. In addition, we have courses to become a final user instructor to train your staff and/or clients.